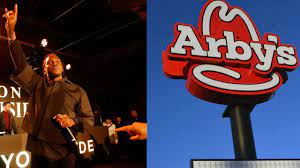 (TIML TEA) The rapper already has a long-standing beef with McDonald’s over its “I’m Lovin’ It” jingle.

“Diss tracks” — where a recording artist singles out a rival for a lyrical takedown — has an established history in hip-hop music. Over the years we’ve seen major feuds between Biggie and Tupac, Jay-Z and Nas, and, just recently, Pusha T and… uh… McDonald’s?

This new, nearly-literal “beef” isn’t just personal either. It’s corporate. Because the track was backed by none other than Arby’s. Yes, unless Amazon and Walmart start spitting fire at each other, this is about as commercial as a diss track can be.

“Spicy Fish Diss Track” debuted yesterday on Arby’s official YouTube channel, and right off the bat, Pusha T holds no punches against the tune’s target. “I’m the reason the whole world love it; now I gotta crush it. Filet-O-Fish is ***, and you should be disgusted.”

Beyond financial compensation from Arby’s, Pusha T apparently agreed to do the track due to a genuine grudge with MickeyD’s, which he alludes to in that opening line. The Virginia rapper and member of Clipse claims that he was heavily involved in creating McDonald’s “I’m Lovin’ It” jingle but wasn’t well compensated for his work.

“I am solely responsible for the ‘I’m Lovin’ It’ swag and the jingle of that company,” he told Rolling Stone. “I did it at a very young age at a very young time in my career where I wasn’t asking for as much money and ownership. It’s something that’s always dug at me later in life like, ‘Dammit, I was a part of this and I should have more stake.’ It was like half a million or a million dollars for me and my brother — but that’s peanuts for as long as that’s been running. I had to get that energy off me, and this [ad] was the perfect way to get that energy like, ‘You know what? I’m over it.'”

Pusha T certainly didn’t feel any need to hold back on the jabs. Other unpulled punches in the 75-second song include “a little cube of fish from a clown is basic” and “drowned in tarter that Filet-O-Fish is tasteless.”

Meanwhile, Arby’s is using the track to promote their own fish sandwiches which feature prominently in the video. In the lead up to Lent, Arby’s expanded its menu to include three fish sandwiches: the King’s Hawaiian Fish Deluxe, the Spicy Fish Sandwich, and the Crispy Fish Sandwich.

“Once you publish a diss track, there is no backing down — it’s the ultimate expression of confidence in your talent, or in this case, taste,” Patrick Schwing, Arby’s chief marketing officer, told us via email. “Our new Spicy Fish sandwich is better than the square fish competition, and we’re excited to issue this challenge. It only made sense to partner with the Pusha T, the best diss track artist in hip-hop, to help tell our story.”

But regardless of whether the song helps Arby’s move more sandwiches, Pusha T had one more positive takeaway. “I’m the first-ever fish sandwich diss ever,” he told Rolling Stone, “and I should go down in history for that.”