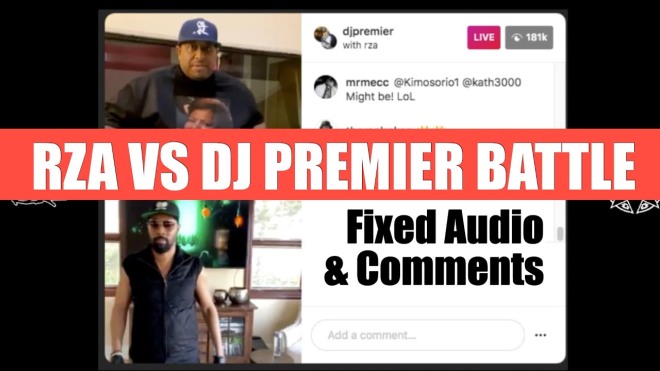 To say the stars came out to watch the titans spar would be an understatement. From some of the greatest MCs to ever touch a mic to marquee brands, the comment section was something to behold. Preemo himself seemed taken aback as he went through an unbelievably stacked list of shoutouts.

Before the battle officially got underway, Preemo shared some gems after being prompted by RZA, who noted the two have a history that dates back to the early ’90s.

They shared a few quick stories, including a past meeting in which RZA and GZA played a demo of “Pass The Bone” as well as Preemo’s first time hearing “Protect Your Neck” in the club with Onyx.

“Word, the fuckin’ RZA … this is crazy,” Preemo could be heard saying as the battle

There were some audio issues though as RZA went back and forth between an iRig setup. While he was working out the kinks, the sound during the first handful of rounds had fans in the comments a little frustrated.

The entire battle in itself was a highlight for Hip Hop heads and a celebration for the culture. Some of the more memorable moments included the two trading Nas tracks, Premier doing godly live cuts throughout and, most endearingly, RZA and his children mouthing out “Wu-Tang Clan Ain’t Nuthin’ Ta Fuck Wit.”

Following a night of running through classics, the Wu-Tang Clan and Gang Starr legends closed out their epic contest by sharing a few unreleased gems from their vaults.

RZA went left-field by putting heads onto his longtime collaborator Reverend William Burkeand unveiling something he cooked up with Joey Bada$$. Just before signing off, Preemo also played a snippet of an unreleased Scarface song.

“This shit will never get old … we have timeless cuts, RZA,” Preem said.

The nostalgia was so thick that almost every song on the setlist was trending at some point in the night. The term “Hip Hop wins” gets thrown around a lot, but this was truly the case as fans were the winners.

Check out videos of the battle above and bump the playlist below.