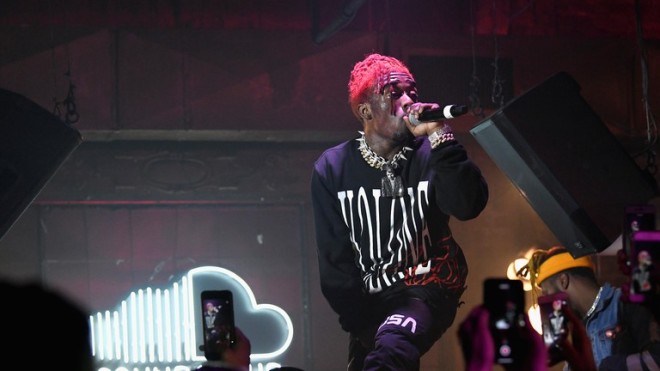 While fans await the release of Lil Uzi Vert’s, Eternal Atake, the Philly native teased the album by dropping a short film on Tuesday (March 3). The intergalactic visual opens with Uzi working a typical 9-5 amidst what appears to be a technical glitch that changes the course of his day.

After making it out the office safely, Uzi finds himself  in an empty field just as a UFO crash lands in the distance. He becomes surrounded by ladies dressed in purple before being abducted into outer space.

Uzi explained some of the concept on Twitter writing in part, “Ladies in Purple comes from Pluto and Venetia Burney.” Burney was an English woman credited with naming the planet Pluto (after the god of the Underworld in Roman mythology) when she was just 11 years old.

Ladies in Purple comes from Pluto and Venetia Burney conscious and her knowledge of Greek mythology 🛸
They can also free roam earth and space. Life span Immortal / Eternal . pic.twitter.com/HCWpammN0n

If the Ladies in purple Decides to wear Blue they are Searching For Love And Rebirth so that means they take your soul and you will be stuck at the age that was your best year. BUT Everything and everyone you love will die or disappear as time goes on .🥺😞💔🛸 #Eternalatake pic.twitter.com/DxMhdlGmjf

Last week, Uzi debuted “That Way” from his Eternal Atake LP. The song, which samples the Backstreet Boys hit “I Want It That Way,” caught the attention of Backstreet Boy’s member, Nick Carter, who loved Uzi’s fresh take on the song and invited him to make a guest appearance on the group’s next album.

Eternal Atake is scheduled to debut on March 13.