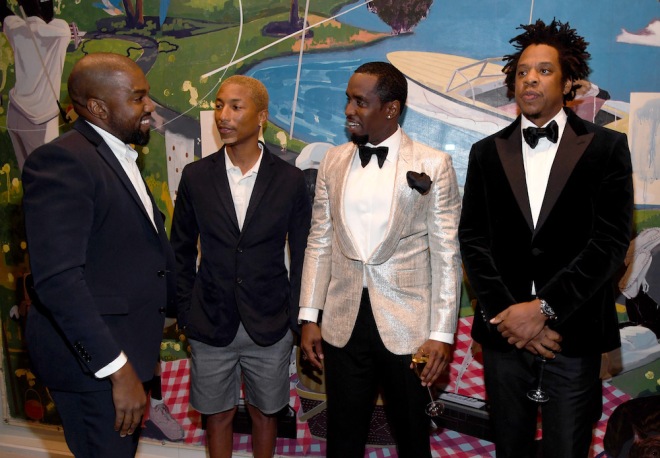 So Diddy celebrated his 50th birthday Again with a star-studded party in Los Angeles on Saturday night (December 14). Among the many guests were Beyoncé, JAY-Z, Kanye West, Pharrell Williams, Big Boi, Post Malone and Tyga.

At some point during the evening, it appeared Hov and ‘Ye finally reconciled after years of not speaking — at least not publicly. While taking photos with the birthday boy, they stood near each other and eventually began talking. They also shared a handshake that was not genuine at all. These pics prove it. A lot of people are speculating this was sort of Ritual Party….Peep what choke No Joke has to say about all this.

Kanye and Jay were close friends at one point and collaborated on multiple projects, including 2011’s Watch The Throne. But in November 2016, Ye went on a lengthy rant during a Saint Pablo Tour stop in Sacramento and essentially accused the Hip Hop billionaire and his wife Beyoncé of being a bad friends.

“I know people backstab you, I felt that too,” he spit on “Kill Jay Z.” “But this fuck everybody attitude ain’t natural/ ut you ain’t the same, this ain’t Kumba Ye/But you got hurt because you did cool by Ye/You give him $20 million without blinking/He gave you 20 minutes onstage, fuck what was he thinking?/Fuck wrong with everybody?’ is what you saying/ But if everyone is crazy, you’re the one that’s insane.”

“It’s not even about Kanye,” he said. “It really isn’t. His name is there, but it’s just the truth of what happened, but I’m sayin’ the whole point is you got hurt because this guy was talking about you on a stage, but what really hurt me is you can’t bring my kids and my wife into it.

Although there were allegedly attempts at making peace, this is the first time they’ve been seen together publicly in years.