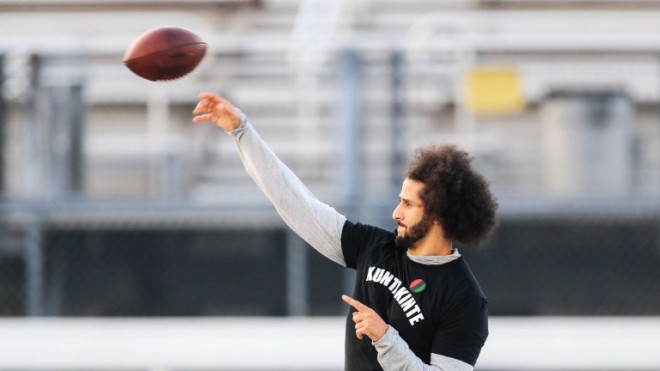 (TIML NEWS) On Saturday (Nov. 16), Colin Kaepernick showcased his talents for a few NFL teams as part of the league’s workout invitational. According to ESPN, the former San Francisco 49ers quarterback switched the venue of the workout from the Atlanta Hawks’ training facility to Charles R. Drew High School.

Given this change, the NFL deemed Kaepernick was a no-show to the workout and expressed its “disappointment” in his decision. ESPN notes the venue change “interrupted schedules” for 25 teams ready to view Kaepernick’s athletic abilities. The teams that were still present include the Detroit Lions, Washington Redskins, Philadelphia Eagles, New York Jets, Kansas City Chiefs, Tennessee Titans, and the San Francisco 49ers.

Kaepernick stated the location change was made to accommodate the media and spectators. In a statement from the league, the NFL said the workout “was designed to give Colin what he has consistently said he wants, an opportunity to show his football readiness and desire to return to the NFL.” According to CNBC, the session lasted 40 minutes.

On the subject of the media being present, Kaepernick and his team believe those personnel would’ve been prohibited from attending his workout had it remained where the league originally selected. The 32-year-old’s team also called into question a waiver they wanted the pro-athlete to sign.

“The NFL has demanded that as a precondition to the workout, Mr. Kaepernick sign an unusual liability waiver that addresses employment-related issues and rejected the standard liability waiver from physical injury proposed by Mr. Kaepernick’s representatives,” the response reads. The league countered that by stating the waiver is standard policy used by the National Invitational Camp concerning free agents.

Now, Kaepernick awaits the NFL’s response, noting that the “ball’s in their court.” Sign off Below folks…

Was Kaep doing too much or nah?