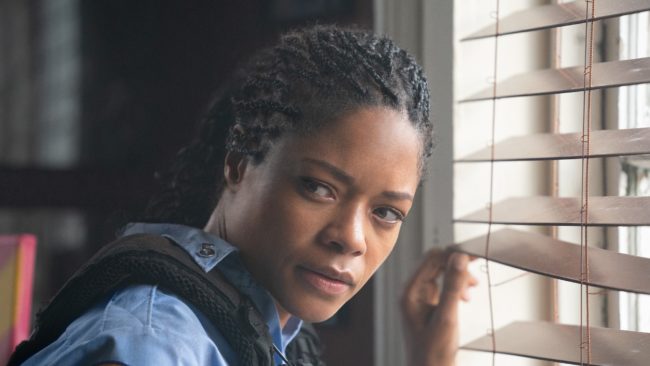 (TIML NEWS) ‘Black and Blue’ stars Naomie Harris a rookie cop who captures a murder on her bodycam.

Filmmaker Deon Taylor is making his petition known with his latest full-length feature, Black and Blue. Set in present-day New Orleans, rookie cop Alicia West (played by Oscar-nominated actress Naomie Harris) returns to her Nola roots in hopes to serve and protect. It doesn’t take long, however, for West to realize being from the neighborhood means nothing when she’s wearing her uniform or badge.

The trailer for the forthcoming thriller premiered Sunday night (June 23) during the 2019 BET Awards. In the three-minute spot, viewers follow West as she exits a squad car and enters an abandoned warehouse. Seconds later, she witnesses a corrupt cop (played by Frank Grillo) kill a local drug dealer.

West now becomes a target after realizing the murder was recorded on her body cam. Her problems are only compounded when local drug dealer Darius (Mike Colter, Luke Cage) is working in concert with the police and puts a bounty on West’s head. Now West has a decision to make: either ignore the truth or expose it.

Dialing in from Los Angeles, Taylor spoke to VIBE about the premise of the Peter A Dowling script, the timeliness of the film and did he, in fact, give it all away in the trailer?