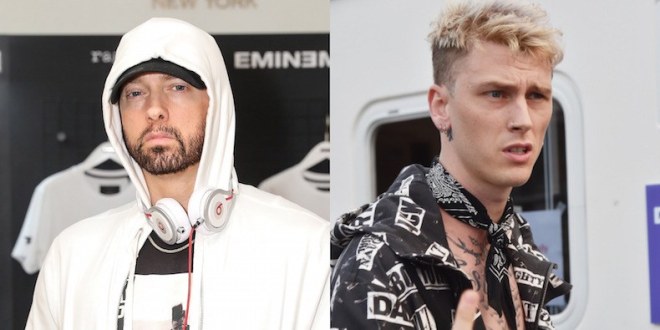 (TIML NEWS) MGK pretty much calls “Killshot” trash, and isn’t with how long it took to come out.

It was an entertaining Friday afternoon to say the least. Machine Gun Kelly finally got his wish when Eminem fired back at his “Rap Devil” diss with some bars of his own in the form of “Killshot.” Em let MGK have it lyrically, dropping facts and tongue twisting disses about the Cleveland Bad Boy. Many fans felt Eminem got the better of the battle with his diss Friday, but MGK doesn’t think so.

Hours after Em dropped “Killshot,” MGK jumped on twitter and pretty much called the diss “trash,” while saying it took forever to respond too. “2 weeks and 3 interviews later…😂🤾🏼‍♂️🚽🚮 #legshot #letstalkaboutit” MGK tweeted out, while sharing the “trash” emoji and a picture of some judges holding up “6” signs, as if it were a 6 out of 10.

Just two minutes after that, MGK decided to capitalize off his notoriety this week and announce a new EP called Binge, which is dropping next week, September 21st. “BINGE EP 9.21.18” he captioned, while sharing the projects cover art that featured MGK’s tongue sticking out with the word “binge” tattooed on it.

It’s pretty safe to assume we’ll hear a couple more shots at Eminem on this Bingeproject, maybe even another full diss record, but MGK is definitely trying to capitalize off the extra eyes on him right now, and we can’t blame him either.

Check out the tweets (below) and let us know what you think. Should MGK continue to fire back or just leave it be with Eminem?