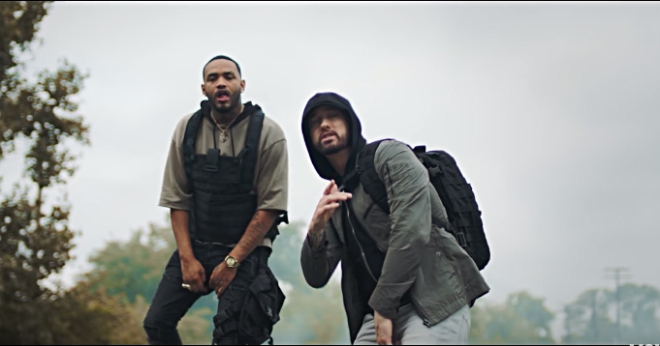 (TIML MUSIC) Eminem has had quite the week. After releasing his two-part Kamikaze interview with Sway Calloway, Em gave fans another gift to enjoy with the release of the “Lucky You” visual featuring Joyner Lucas.

Teasing the video on his social media platforms earlier this week, Eminem finally dropped the video on Thursday (Sept. 13), after experiencing through a small one-day delay.

The six-minute visual follows Em and Lucas around a dystopian state as they appear to be the only ones to survive in this post-apocalyptic world. The two take turns on their respective grounds as they alternate verses throughout the track before a number of hooded strangers enter the mix.

Sporting demon-red eyes, the minion-like mob goes seemingly unnoticed until approximately half-way through the visual when the two are surrounded. Alarmed by their responsiveness, Em cuts the track for some comic relief, toying with the strangers’ copy-cat like nature with a series of dances and dabs.

Once he’s cool with the red-eyed strangers, the track resumes, allowing fans to get back into the dystopian zone.