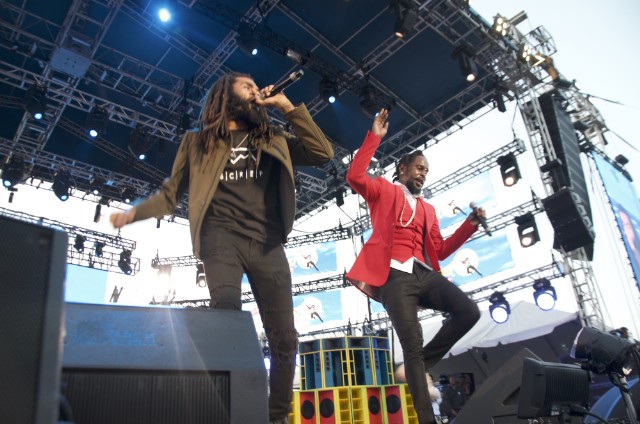 (TIML MUSIC) “Big up all the real gangsters,” said Popcaan around 4 a.m., bathed in spotlights on the stage at Red Stripe Reggae Sumfest in Montego Bay, Jamaica. “Big up all the real Popcaan fans, mi love you for life. Don’t make nobody tell you-you can’t make it in life because they did tell me that one time. You know why?”

Dressed in a red suit jacket and matching vest with a long gold chain around his neck, Popcaan launched into a few lines from “Gangster City.” The track was recorded back in 2010 when Popcaan was a member of Vybz Kartel’s Portmore Empire and the dress code was tank tops, fitted caps, and bandanas. That same year, his catchy cameo on Kartel’s single “Clarks” helped elevate Popcaan’s profile around the world. Eight years later he’s a top attraction at Jamaica’s biggest music festival, but it’s clear that the Unruly Boss, as he’s now known, will never forget the struggle of his early days. “I’m from a place where dog eat dog,” he sang on the track. “Mi know ’bout living hard.”

The song’s title is a nickname for Three West, the government-subsidized housing scheme in the Jamaican city of Portmore where young Andrae Hugh Sutherland was raised from the age of seven. Popcaan has come a long way since then, a journey recounted on his acclaimed debut album Where We Come From, released on Mixpak Records in 2014. “I’m representing my whole community, people who have been through it with me,” he said of the project back then. “It’s not really my story alone.”

Popcaan’s debut featured a collaboration with Pusha T, and since then the youth from Gangster City has become an in-demand international recording artist, sampled by Kanye West and collaborating on hits with Drake, Jamie XX and Young Thug, Giggs, Gorillaz and Stefflon Don, to name a few. The buzz surrounding his name has built anticipation for his sophomore album, Forever, to a fever pitch.

The night before Popcaan hit the Sumfest stage, he premiered his new album in the streets of Kingston. The free Thursday evening listening session took place in the parking lot of Triple Century Sports Bar and was streamed around the world via Boiler Room TV. “Big dreams weh we have, thank God we still livin’ it,” he sang before his DJ Creep Chromatic pressed play on the album. “Me did broke like dog. Now I am winning it…”

During both the Kingston listening event and his Sumfest set, Popcaan made a point of bigging up Vybz Kartel, who is currently appealing his conviction on murder charges. “All who say Kartel fe free say Free!” Popcaan instructed the crowd. Even after seven years behind bars, Kartel remains a popular figure in Jamaica’s dancehall scene. During his absence Popcaan has elevated from protege to pop star, racking up over a million followers on Instagram, where he can be seen rocking stages around the world or racing his collection of motorcycles through the streets of Jamaica. The inevitable jealousy from his peers in Jamaica is one of the recurring themes of Forever. “This music biz is like a battle to me,” he sings on “Firm & Strong,” one of the early singles from the album. “So much f**king hatred and grudge.”

“I’m sharing my experience with the fans,” Popcaan told us from backstage after the show. “Certain songs on Forever is very personal, like ‘Silence’ and ‘Happy Now.’ And it is coming straight from things weh happen to me in my life. This album is just a continuation of Where We Come From to make them know say Popcaan is here Forever.”

Even as he declares his longevity in the game, Popcaan admits that his success has come at a serious price. “Watch who you tell when you a buy new Bimma, careful who you confide inna,” he sings on the album-opening cut “Silence,” which explores the downside of leveling up. “Ah nuh anybody pour my drink, an nuh anybody buy my dinner / So hard fi trust your enemy, hard fi trust your friend / Me nah lie, mi love me family but mi nuh trust the whole a dem.” As if to drive home this chilling confession, Popcaan follows the line up with, “Might sound f**k up but ah so me feel.” Once a carefree artist known as the Raving King, Popcaan has always used his music to speak truth. The Forever album is no exception.

Popcaan touched on related issues throughout his Sumfest set, from the dreamy “Weed Is my Best Friend” to the harder-edged “Never Fear Them.” Between songs, he addressed a few words to his rivals in the ultra-competitive dancehall industry. “Some artists try to test me and get me mad,” he stated. “But we on a mission to take the music further.” He punctuated these remarks with his latest signature catchphrase, “Dem Dead.”

Along with his gift for crafting infectious melodies, Popcaan is famous for coining popular slang expressions like “TR8” “Wha!” “Killy Killy” and “Kick Out… Far Out!” He now drops “Dem Dead”—sometimes used as a question, sometimes as an exclamation—throughout his live shows, conversation and as a social media hashtag.

“It’s the influence,” he explained backstage. “People enjoy the things them weh me say… Like sometime people say them a foolishness. But as time goes by, even who say that a foolishness join in. Because is something weh them never hear yet. Is something weh make them feel happy when them hear it.” Popcaan considers his gift of gab to be a blessing. “There’s are a lot of artists and not every artist have the same meds or the same power,” he says. “I’m very grateful for being who I am.”

As the sun began to rise over Montego Bay, a city that’s been under a state of emergency since last January when a joint military and police task force was deployed to quell a wave of violence in the island’s leading tourist center, Popcaan delivered two of his more inspirational numbers. First, he called Dre Island onstage to perform “We Pray” and then he delivered his biggest recent hit, a song called “Family.” His lyrics on the track harkened back to his journey to stardom: “Although man make it now, me know how struggle feel, and me know all the p***y them, and me know who f**kin’ real.” As flames shot into the dawn sky, Popcaan delivered the lines with evident passion.