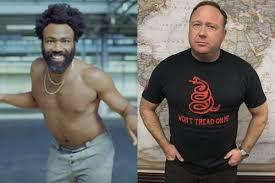 (TIML NEWS) It didn’t take long for conservative pundits to latch on Childish Gambino’s “This is America” video with murky perspectives. Conspiracy theorist and radio host Alex Jones ignored the art of research and accused the artist of performing voodoo in his video.

On Monday (May 7) the Info Wars host went through a laundry list of complaints about the layered visual and went as far to claim the video was force fed to the public by liberals. Directed by Hiro Murai, the video addresses many topics like gun violence and the juxtaposition of black entertainment during racial unrest. Jones goes on to mispronounced Glover’s musical moniker and claimed he was performing a trance powered by voodoo. “Every passing day, the economy comes back what are they going to do? They’re going to challenge us with censored internet, and forced feeding things like Childish Gambino, giving it 10 million views over the weekend. Saying, ‘This is America, this is America, this is America,’” he said.

“So it’s all this emotional idiocy and people fittingly doing a voodoo dance. You know, I’m looking at video they just played of the Donald Glover Childish Gambino dance he is doing that he probably thinks you think is real original. That’s a voodoo dance he is doing. In fact that’s a full ‘nother subject. Pull me in with voodoo dancing, people in trance, and that is a voodoo dance 110 percent. You’ve got all of that then personified through artwork but they don’t think you know what you’re actually looking at. The Clintons like to go and do their own voodoo rituals, that’s in the news.”

The dance moves were choreographed by Sherrie Silver. Some standout moves include money spraying, a traditional celebration in Nigerian culture and blends of Blockboy JB’s shoot dance to the South African Gwara Gwara. You know, things that aren’t voodoo. For years, western civilization has had a skewed view of religions, particularly Haitian Vodou and Louisiana Voodoo. Peep the link below of Alex Jones Hating on what he doesn’t Understand.