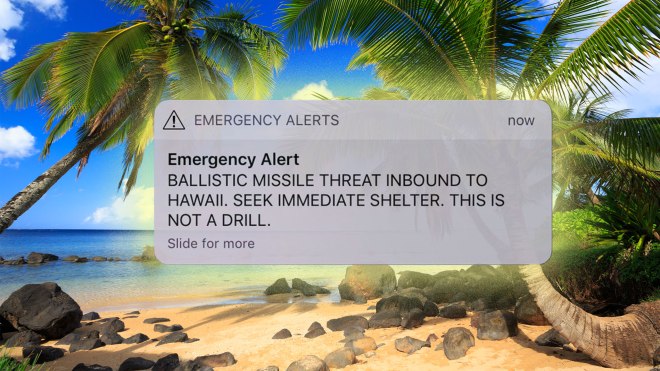 (TIML NEWS) The worker who accidentally sent over a million people into panic in Hawaii with a false missile warning will not be fired, but reassigned.

The Washington Post reports the Hawaii Emergency Management Agency (HIEMA) has decided to let the employee of ten years return to work with a different position. On Saturday (Jan. 13), a warning went out to residents and tourists about a missile hitting the island. Intentions were to send a demo drill warning, but the real one was sent out not once, but twice. The problem was corrected over thirty minutes later.

“Part of the problem was it was too easy — for anyone — to make such a big mistake,” HIEMA spokesman Richard Rapoza said. “We have to make sure that we’re not looking for retribution, but we should be fixing the problems in the system. … I know that it’s a very, very difficult situation for him.”

The warning was on a computer with a drop feature. The drill was labeled, “DRILL-PACOM (DEMO) STATE ONLY” and the real warning was, “*PACOM (CDW) STATE ONLY.” The state didn’t have a template for false alarms, leading to the lengthy delay.

Since the blunder, HIEMA has received death threats. “We understand that members of our community are angry about Saturday’s false alarm, and we are looking at these messages as individuals blowing off steam,” a spokesperson said Monday (Jan. 15). “While we take any threat against our personnel seriously, we are doing our best not to escalate the situation.”

FCC Chairman Ajit Pai also called out the state for their actions. “[The state of Hawaii] did not have reasonable safeguards or process controls in place to prevent the transmission of a false alert,” Pai said.

For now, two people will lead the alerts and more protocol will be put into place before any drills are sent out to residents.