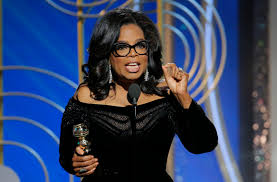 (TIML NEWS) Oprah Winfrey recently made history as the first black woman to receive the Cecil B. DeMille Awards for her lifetime achievement at the 2018 Golden Globes on Sunday (Jan. 7). In acceptance of the ceremony’s highest honor, the Hollywood actress and billionaire businesswoman delivered a powerful speech that had the audience on their feet and the Internet endorsing her for president.

Winfrey began her acceptance speech with a tale of her watching the 36th Academy Awards back in 1964. “I was a little girl sitting on the linoleum floor of my mother’s house in Milwaukee watching Anne Bancroft present the Oscar for best actor at the 36th Academy Awards,” she recalled. “She opened the envelope and said five words that literally made history: ‘The winner is Sidney Poitier.’ Up to the stage came the most elegant man I had ever seen. I remember his tie was white, and of course his skin was black, and I had never seen a black man being celebrated like that.

The Wrinkle In Time star also stated how that moment has come full circle, with her being given the same honor Portier received then. “I tried many, many times to explain what a moment like that means to a little girl, a kid watching from the cheap seats as my mom came through the door bone tired from cleaning other people’s houses. But all I can do is quote and say that the explanation in Sidney’s performance in Lilies of the Field: ‘Amen, amen, amen, amen,’” she added. “In 1982, Sidney received the Cecil B. DeMille award right here at the Golden Globes and it is not lost on me that at this moment, there are some little girls watching as I become the first black woman to be given this same award. It is an honor — it is an honor and it is a privilege to share the evening with all of them and also with the incredible men and women who have inspired me, who challenged me, who sustained me and made my journey to this stage possible.

Winfrey concluded her speech with a powerful message to the women and men speaking out against the abuse and discrimination within their respective fields, as well as the allies who wore black and are standing in solidarity with those victims. “I’ve interviewed and portrayed people who’ve withstood some of the ugliest things life can throw at you, but the one quality all of them seem to share is an ability to maintain hope for a brighter morning, even during our darkest nights,” she said. “So I want all the girls watching here, now, to know that a new day is on the horizon! And when that new day finally dawns, it will be because of a lot of magnificent women, many of whom are right here in this room tonight, and some pretty phenomenal men, fighting hard to make sure that they become the leaders who take us to the time when nobody ever has to say ‘Me Too’ again!”

Following her moving speech, many Twitters users began using the hashtag #Oprah2020, in hopes of getting the mogul to run for office. While she has not expressed interest in running, Oprah in the White House doesn’t sound too bad right about now.

Watch Oprah Winfrey’s acceptance speech for the Cecil B DeMille Award in its entirety above.