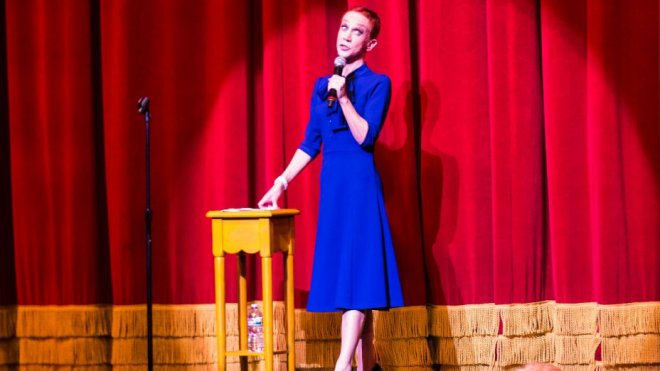 Kathy Griffin on Saturday blasted TMZ’s Harvey Levin and released his personal number, which she did to retaliate against his gossip site and TV show.

Griffin posted a little longer than 17 minute video to Twitter and YouTube in which she warned of Levin and shared a voice message he left her requesting a chat, which included his phone number.

“I just want you guys to know Harvey Levin, Harvey Levin a blogger, is very much in bed with everyone from Hollywood to Donald Trump,” she said. Doesn’t that bother you, that the president of the united states is talking to a gossip blogger?”

Griffin explained she took the measure because TMZ helped fueled the rage against her after she took a photo of a fake severed head resembling Donald Trump.

A federal investigation was opened into Griffin for the picture, and she has been place on the Interpol list, said said.

“I was on the no fly list for two months, so every single airport I have gone to, I have been detained alone,” she said.

“They have done hit pieces on me to the point where it’s actually affected my career,” she said. “Harvey Levin, have you ever done anything honorable, ever?”

She then accused Levin of being “the gay male version of Kellyanne Conway” for previous comments he made to her in private.

“I just want everyone to know TMZ is very much in bed with this administration,” she said. I ran out of fucks to give, Harvey.”

The comic also went after Andy Cohen, who recently publicly slighted her.

Cohen pretended he did know who Griffin was when he was asked by a TMZ  cameraman the other day. The tow worked together for years at the same network.

And it was Cohen who was named to replace Griffin on CNN’s New Years Eve special with Anderson Cooper after she was fire for the Trump head photo.

“People like Harvey Levin and Andy Cohen, honestly just live to take women down,” she said.

“He is going yo say he was kidding: no. He was asking me to do cocaine with him,” she said. “That made me very uncomfortable.”

The comic then turned her sights to Bravo, saying women in top positions were “complicate” in the alleged poor behavior of Cohen. Peep the Video Below!!!!

If you have 17 minutes to spare, I have a hell of a story to tell. @Andy @TMZ @HarveyLevinTMZ https://t.co/OydLVQaGAd