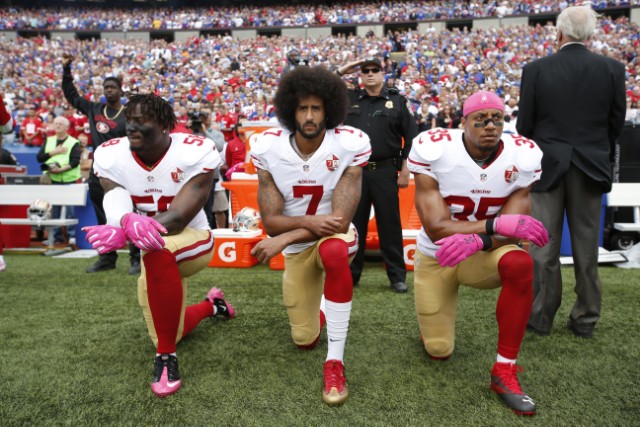 (TIML NEWS) Colin Kaepernick is still without a job nearly one year after starting his on-field protest against police brutality. And although historic efforts have prompted many sports fans to burn his jersey, it seems the Museum of Modern Art (MoMA) is seeking to put his uniform on display for the rest of the year. The MoMA will reportedly place Kaepernick’s jersey in its current exhibit in New York.

The quarterback’s jersey will reportedly be displayed in the museum’s “Items: Is Fashion Modern?” exhibit. The exhibit reportedly examines how sports have influenced fashion and culture.

According to Stephanie Kramer, a research assistant at the museum, Kaepernick’s jersey opens the discussion on how particular sportswear can be symbolic beyond representing a person’s favorite team. “When the whole Kaepernick thing happened last year, it was noted by the NFL that his jersey was outpacing the sales of [New England Patriots quarterback] Tom Brady’s jersey,” Kramer told Quartz.

“To us, that seemed to us to indicate a sea change in what the jersey represents for people. Not necessarily your hero, good-looking quarterback, but perhaps somebody who was using his sports prowess and celebrity to say something socially and politically. We thought that made a really important statement about what the sports jersey could mean to its wearer.”

The “Items: Is Fashion Modern?” exhibit reportedly open at the MoMA on Oct. 1, and will be on display until Jan. 2018.