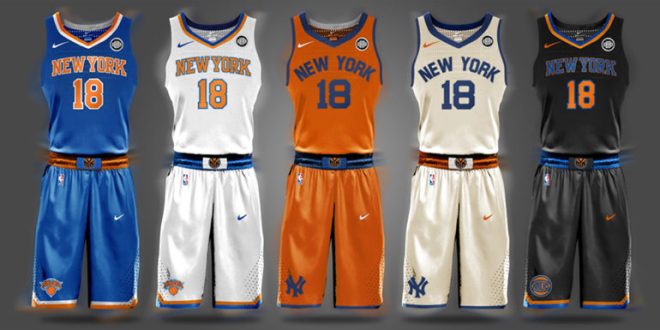 (TIML SPORTS) Although first looks at individual team jerseys have been revealed since July, Nike and the NBA officially unveiled the jersey on Friday night (Sept. 15), introducing new innovations and a new look.

Unveiled during a private launch event at Sony Studios in Los Angeles, we got a first look at what they call the Nike NBA Connected Jersey: the first NBA jersey that gives the wearer an all-access pass into their favorite team and players.

The new Statement Edition uniforms (following the previously unveiling of the Association and Icon Edition uniforms) were unveiled, alongside the Nike Therma Flex Showtime Warm-up Jacket, which the league says is the first hooded jacket to be worn on the court during gametime.

“When you think about basketball, you think of Nike and the NBA,” said Nike CEO/President Mark Parker. “After helping fuel the sport’s impact for years, we are thrilled to now be able to push the boundaries of what’s possible directly with the NBA. From modernizing the look of the game to revolutionizing how fans can be a part of it, we can’t wait for the season to start.”

“Our Nike uniforms set a new standard for connecting our most passionate fans with their favorite NBA teams and players,” added NBA Commissioner Adam Silver. “Nike has once again taken the game of basketball to a new level, this time with one of the most advanced jerseys in sports.”

The new jerseys use a new NikeConnect technology, where each adult-sized Nike NBA Connected Jersey will have an embedded NFC (near field communication) chip that will launch real-time team and player content using your smartphone. Content includes pregame arrival footage, highlight packages and top players’ favorite music playlists. Additionally, other exclusive offers and experiences will be unveiled throughout the season.

To unlock the content, fans only have to download the NikeConnect app and tap the jersey with their smartphone.

As for the Nike Therma Flex Showtime Warm-up Jacket, it celebrates style in the game, with Nike designers refreshing the apparel staple. It was created with new Nike Therma Flex fabric, helps athletes maintain the right body temperature during pregame warm-ups and downtime during a game.

The Nike NBA Connected Jerseys, as well as the will release worldwide on September 29 at the NBAstore.com, while making their debut on-court alongside the jacket on September 20th.

All Statement Edition jerseys drop November 20, and will begin being worn on-court on November 25.