(TIML NEWS) Day 2 of the Meadows Music & Arts Festival was jam-packed with hip-hop acts from today and yesterday, thanks to surprise guests during sets from LL Cool J, Future, and Gorillaz.

The magic took place on Saturday (Sept. 16) as festival attendees enjoyed more food, more free swag and of course, more music. Acts like artist Jacob Banks and Tory Lanez held down their sets with coastal grooves as Flatbush Zombies riled everyone up with new jams.

But it was titans like LL Cool J, who shook the festival’s stages with guests D.M.C, A Tribe Called Quest, and Future whose guests were Nicki Minaj, Yo Gotti and Young Thug.

Meechy Darko, Zombie Juice, and Erick Arc Elliott brought down the main stage early as they performed tracks from their 2016 debut album, 3001: A Laced Odyssey. Pockets of rap mosh pits formed in the crowd with hip-hop heads jumping to the heavens.

Jacob Banks provided music for the soul during his set on the Shea Stage, giving festival kids an introduction to soul’s most beloved newcomer. Kicking things off on the American Eagle stage was fellow London native Youngr with his custom-synth pop sound.

Over on the hip-hop side were Big Boi and De La Soul, whose respective sets kept fans on their toes.

Mr. Todd Smith did a fine job reminding people who he is during his set on the fitting Queens Blvd. stage.

“Most of you guys know me from hosting the Grammys or that guy from Lip Sync Battle,” he jokingly said to the crowd before jumping into hits like “Momma Said Knock You Out,” “Doin It,” and “Loungin (Who Do You Luv).” With Meadows marking his return to the stage, the GOAT decided to share it with fellow Queens natives D.M.C. and A Tribe Called Quest.

Q-Tip performed a mashup of “Vibrant Thing” and “Doin’ It” with LL before belting out “Award Tour” with Jarobi White.

Things only got better as Run DMC’s Darryl “D.M.C.” McDaniels appeared on stage with a crown in tow.

“I only brought this out for you,” he said referring to his signature hat.

The two traded bars to “It’s Tricky” and “Me Myself and My Microphone,” D.M.C.’s 1995 collaboration with Living Colour. “The Message” followed after as fans, festival workers and even police recited one of hip-hop’s biggest classics.

That Tasty Part: Across from the stages stood The Feastival of Queens, a set up including some of the best restaurants located in New York. Vendors included Roberta’s Pizza, Dough Donuts, Taiyaki NYC and Ramen Burger, satisfying any vegan or meat lover on the grounds.

With the sets occurring just two hours apart, no one was prepared for what Future had in store on the Meadows Stage. Paired with a live band and a group of very talented young dancers, Atlanta’s own attracted those privy to the HNDRXX world. What brought the most attention was the return of Nicki Minaj to her native town.

The rap goddess performed “Rake It Up” with Yo Gotti and “You Da Baddest” with Nayvadius. Young Thug also took over the stage with “Lifestyle,” “Pick Up The Phone” and “Relationship,” his track with Future from the Beautiful Thugger Girls project. 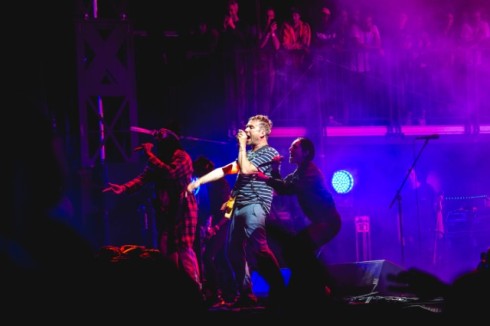 Gorillaz would close out the Meadows Stage at 8:15 pm EST, taking fans across the virtual band’s discography. With a mix of tunes from Plastic Beach and the self-titled debut album, Albarn soothed the crowd during the first half of his set, allowing the recent release of Humanz to take over the latter.

Many collaborators from Humanz showed up and got down like D.R.A.M (“Andromeda”), Zebra Katz (“Sex Murder Party”), Peven Everett (“Strobelite”) Little Simz (“Garage Palace”) and Pusha T, who performed “Let Me Out.” Mavis Staples, who sings the song’s hook appeared on the screen, still giving us all the feels.

After leaving the stage 30 minutes early, fans knew the show was beyond over. Albarn returned to perform Plastic Beach-cut “Stylo” with the help of Mos Def (Yasiin Bey), who previously performed for the “final” time at Atlanta’s ONEMusic event. With an image of the late Bobby Womack on the screen, Everett did the singer justice as he performed his vocals.

Of course, the set wasn’t complete without frequent collaborators De La Soul, who commanded the crowd with “Feel Good Inc.” Closing out the set was “Clint Eastwood,” Gorillaz’s 2001 breakout jam.

The final day of Meadows is here with performances from Nas, Ghostface Killah, Fantastic Negrito and The Red Hot Chili Peppers.