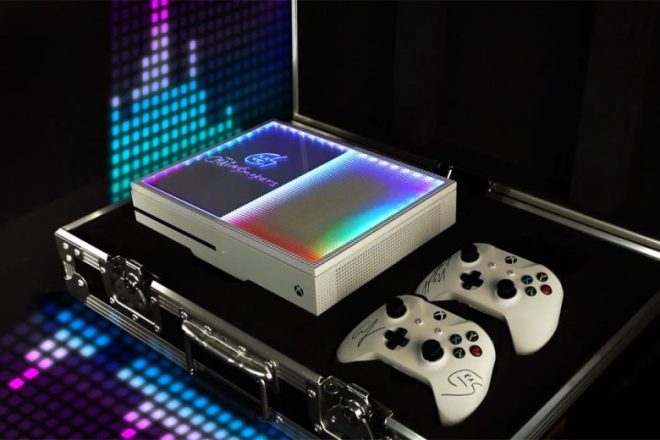 (TIML TECH) Xbox announced this week that it will create a number of custom, one-of-a-kind Xbox One S consoles alongside fan-favorite celebrities and brands.

The first of these is a console designed by DJ duo The Chainsmokers, known for bringing light and sound together for a stimulating experience, just like their high energy shows.

To create the console, the Xbox team used a thumbnail-sized, USB-powered microprocessor that works in real time to convert sound into an ever-changing and dynamic light show. 60 miniature pixels illuminate the multi-layered acrylic display creating a 3D effect and lighting up the Xbox console in the process.

“We were really pumped to work with Xbox on this project and help bring our music to life in a new way, by combining it with the best gaming console in the world,” said The Chainsmokers. “We knew the team would do something amazing, but when we saw the custom Xbox One S for the first time, we were both blown away by how cool the design is.”

“Over my time, I have seen many unique consoles come to life but nothing ever like this one. This is a true piece of art and we’re so excited that we got to partner with The Chainsmokers on it,” said Aaron Greenberg, GM of Games Marketing at Xbox.

We partnered with @Xbox to create this this amazing Xbox One S console. Tell us in a Tweet why you love it so much to win! pic.twitter.com/r3OY1WCqWi

Unfortunately, you cannot buy these custom Xbox One S consoles. Instead, one fan will have the chance to win it by checking out The Chainsmokers Twitter account for details, from now until September 17th. Good luck.