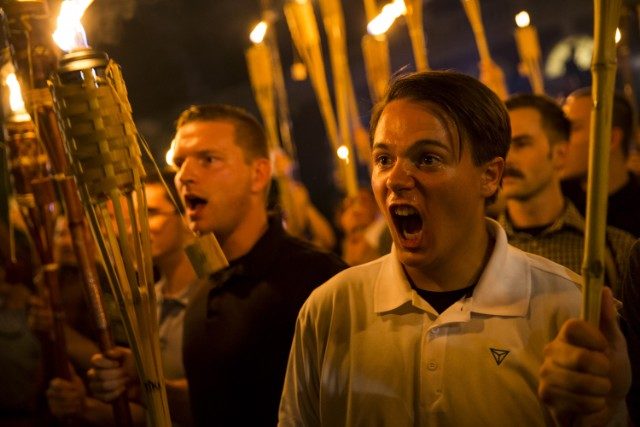 (TIML NEWS) In the age of social media, almost anyone can be found, including Charlottesville, Virginia, protesters who think they can spew hate and then return to their jobs and families as if nothing happened. Case in point: North Dakota’s Pete Tefft.

Tefft, who attended last weekend’s demonstration in protest of the removal of a Robert E. Lee confederate statue, was spotted by those close to him. Tefft’s father got wind of his son’s actions and wrote an open letter denouncing his actions.

“I, along with all of his siblings and his entire family, wish to loudly repudiate my son’s vile, hateful and racist rhetoric and actions. We do not know specifically where he learned these beliefs. He did not learn them at home,” Pearce Tefft wrote.

“I have shared my home and hearth with friends and acquaintances of every race, gender and creed. I have taught all of my children that all men and women are created equal. That we must love each other all the same,” Tefft continued.

Pete Tefft’s’s own nephew said his uncle’s behavior isn’t a surprise, going as far as to call him a “maniac” who has “turned away from all of us and gone down some insane internet rabbit hole and turned into a crazy Nazi. He scares us all, we don’t feel safe around him, and we don’t know how he came to be this way. My grandfather feels especially grieved, as though he has failed as a father.”

The elder Tefft said he blames himself for his son’s actions because he never spoke up when his son made disturbing comments.

“It was the silence of good people that allowed the Nazis to flourish the first time around, and it is the silence of good people that is allowing them to flourish now,” he wrote. “Peter Tefft, my son, is not welcome at our family gatherings any longer. I pray my prodigal son will renounce his hateful beliefs and return home. Then and only then will I lay out the feast.”

Pete Tefft, however, isn’t bothered or concerned that he’s brought shame to his family, and says he plans on organizing his own white supremacist rally in his hometown of Fargo, North Dakota, in October.

Yayy! More white supremacy (said no one with common sense, ever!).