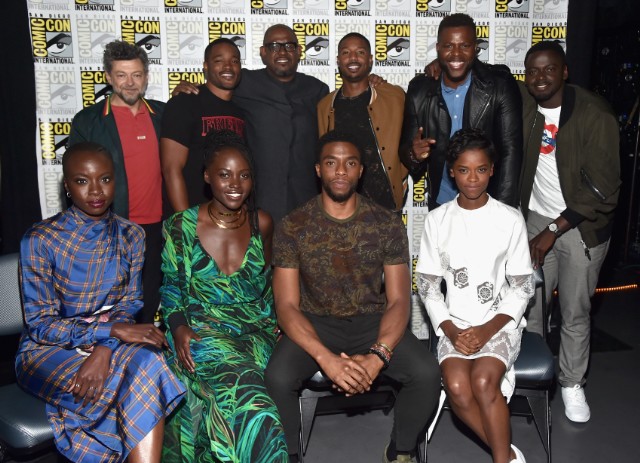 (TIML NEWS) The cast of the highly-anticipated Black Panther film made an appearance at San Diego Comic Con over the weekend (Jul. 22) to answer some fan questions and unveil more clips of the film. The exclusive footage was apparently so exciting to witness that audience-goers weren’t the only ones cheering.

Watch as the cast of #BlackPanther reacts to seeing the exclusive Hall H film footage for the first time at #SDCC! pic.twitter.com/H3nFJKD16L

The film’s stars (Chadwick Boseman, Lupita Nyong’o, Danai Gurira, Daniel Kaluuya, Forest Whitaker, and Andy Serkis) leapt to their feet, cheered and gave each other celebratory hugs during their appearance at Hall H. According to moderator Chris Hardwick, this was the first time the film’s ensemble had seen this footage as well.

The footage was meant for the audience’s eyes only (for now) as a perk of SDCC. Varietyreports that the exclusive scenes involves Gurira’s character “[pulverizing] her attackers with a golden spear,” Boseman’s titular character attempting to stop the villain (Serkis), and a montage set to Kendrick Lamar’s “DNA.” Sounds pretty lit to us.