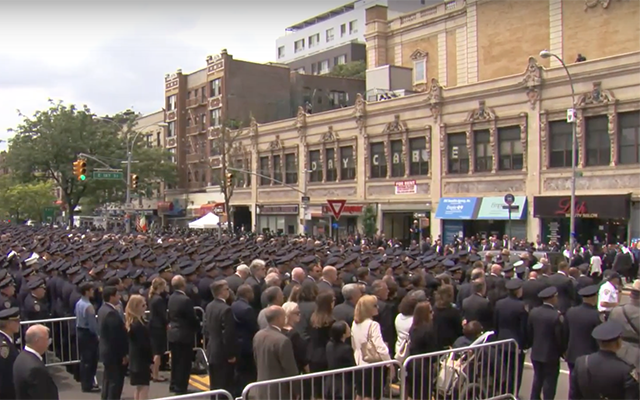 (TIML NEWS) 16-year-old Julien Rodriguez had the perfect vantage point to witness the funeral procession leaving the Paradise Theater in the Bronx on Tuesday for slain officer Miosotis Familia. His apartment was barely around the corner on 188 St. and he had a bone to pick with the #BlueLivesMatter activists, cops and mourners packing the streets.

Rodriguez did what any angsty teen wanting to send a message could do in a situation like this: He fired up his sound system, selected NWA’s “F**k tha Police” and put that track on repeat until the wheels fell off. Or, at least, until 20 police officers showed up to his door demanding he cut the sh*t.

But Rodriguez wouldn’t let the music die, telling the New York Post that his older brother and best friend were both fatally shot by cops. “Since they did not show respect for my brother and my friend, why should I show respect to them?” he said.

The Post couldn’t find death records for either Rodriguez’s brother or his friend, and the teen even admitted that he felt bad about Familia’s death. The detective was gunned down while sitting in a police command vehicle in Fordham Heights on July 5.

Potentially lying about two deaths isn’t exactly a good look for the many movements railing against police brutality, nor is “an eye for an eye” an especially effective way to stop the violence.

Rodriguez did eventually turn off the tunes and apologize to the officer’s squad after they rolled deep into his building, but only because he didn’t want to get evicted. Wow sound off below!!!!