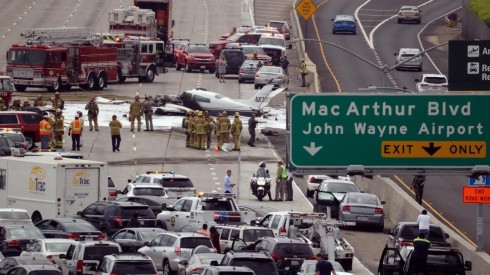 (TIML NEWS) A small plane crashed on the 405 Freeway in Irvine, Calif. on Friday (June 30), near the John Wayne Airport where it was attempting to land.

A video of the crash surfaced and was broadcast by local news, which shows the small, twin-engine Cessna 310 flying low as it approached the airport but came up short, crashing onto one of the busiest freeways in the world.

Upon landing, it immediately burst into flames.

The news report says the plane had just taken off, when one of the engines failed.

Luckily, a number of heroic people helped two men out of the plane and saved their lives in the process. Wow peep the video below