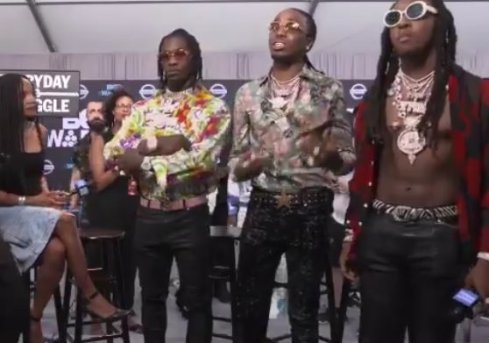 (TIML NEWS) Joey Really loves to piss people off lol. There has been yet another awkward interview from the Everyday Struggle team.

The show’s hosts Joe Budden, DJ Akademiks, and Nadeska Alexis were out at the BET Awards this weekend. They took the time to interview the rap group Migos.

At one point, Akademiks asked Migos member Takeoff about not having a verse on “Bad and Boujee.”

The conversation then got tense, and Budden called for the interview to end before he walked off the set.

Migos apparently took issue with the rapper-turned-media personality leaving as both camps nearly got into a scuffle.

“I was justified, I’d had enough,” Budden later tweeted. “They was just a little too sassy for me that’s all.”

Akademiks offered his own explanation on Instagram, “I couldn’t hear sh-t.. no ear piece and loud asf on the carpet. I was the only person in between Migos and joe… I tried y’all.”

The Everyday Struggle exchange with Migos comes after Vic Mensa called out Akademiks during a show last week.

This is also not the first time Joe Budden walked out of an interview.

The New Jersey native exited a sit down with Hot 97 in 2016, and he cut short a 2015 guest appearance on Taxstone’s podcast. Lol take a look below!!!!

Had the pleasure of speaking w Migos. 😏 Tomorrow on #EverydayStruggle