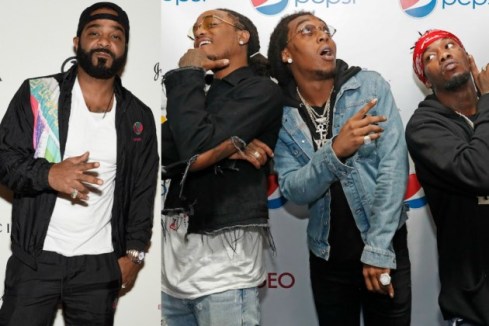 (TIML MUSIC) Jim Jones is putting in a lot of work. Jim Jones is repping a new label and he’s got new music to boot, posting a preview of an upcoming collaboration with Migos to Instagram early Friday morning (Feb. 10). “Right to work #Vl4L comin soon,” Jones wrote, showing that he was with Quavo, Takeoff and Juelz Santana in the studio.

It was announced earlier this week that Jones Signed to Jay Z with Roc Nation , the label spearheading Jimmy’s many endeavors moving forward, music, acting and fashion included. “The fact that people are ready to forget the past and help me move forward to the next step of my career is very inspiring,” Jones said. “As you get older you realize that most of your peers are either dead or in jail. The fact that we can move past the BS is a testimony to how much we have grown.”

Jones delivered an emotional interview  at Hot 97 yesterday, speaking on his relationships with Cam’ron, Jay Z and Max B. Time will tell how his new affiliations will influence his music, but no rap act is bigger now than the Migos, Jimmy wasting no time as he gets to snapping.

Unlike a slew of others, Jones doesn’t seem to adopt the Migos flow for the song, which can be previewed below. The Atlanta trio currently have the No. 1 album in the country, with Culture moving 131,000 total units in its first week of release.