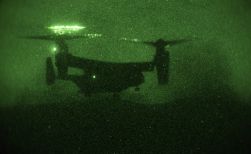 (TIML NEWS)  Smh so a daring special operations raid into Yemen was approved by the White House and poorly executed this weekend, leaving one US soldier dead and three wounded. Details remain sketchy, but a group made up primarily of America’s most notorious tier one counter-terrorism force, SEAL Team Six, flew into war-torn Yemen to raid an al Qaeda in the Arabian Peninsula (AQAP) headquarters in the al-Bayda region of the country. The raid was supposedly a kill-capture and site exploitation operation aimed at the group’s key leadership, including AQAP kingpin Qasim al Raymi.

The SEALs experienced an hour-long firefight after arriving on target under a moonless night sky. The team supposedly killed 14 AQAP operatives in the surprise assault, but also suffered one KIA and three wounded in the process. A V-22 Osprey (it is unclear if this was a Marine MV-22 or USAF CV-22) that was evacuating casualties during the operation experienced a hard landing and was destroyed by choice as the team exfiltrated the target area. Multiple structures were also said to have been obliterated by airstrikes during different phases of the assault.

Although nobody was said to have been captured in the raid, large amounts of intelligence that could potentially lead to future raids and targeting of AQAP assets was reported to have been obtained in the operation. A spokesman for AQAP said that only innocents were killed in the raid, including the eight-year-old daughter of American-born, firebrand cleric Anwar al Awlaki, who was killed in Yemen 2011 by a US drone strike. It is rumored that the brother of Anwar al Awlaki was also killed during Saturday’s operation, as well as Abdulrauf al Dhahab, a top AQAP lieutenant with strong regional family ties. Al Dhahab’s compound, working in part as an AQAP operations center, seems to have been the main target of the mission. Sound off below on this mess smh.