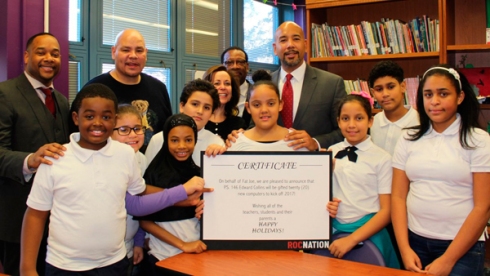 (TIML NEWS)The Media will never mention this…so its my job to do so. The borough president collaborated with a hometown rap star not in a song, but to give back to a local elementary school during the holidays. Borough President Ruben Diaz, Jr. teamed up with rapper Fat Joe to announce the donation of 20 new desktop computers to P.S. 146 Edward Collins, the rap artist’s alma mater.

The announcement of the computer donation was made in the school auditorium, where P.S. 146 elementary students anxious awaited for the Bronx-born and Bronx-bred rapper to make his appearance.

Fat Joe joined the BP Diaz and P.S. 146 principal Ronald Laurent when he made the announcement to the students about the new computers.

This holiday season, Fat Joe wanted to give back to the youth of this borough, and I am very proud that he chose his alma mater, P.S. 176, to receive these new computers,” said Diaz, Jr. “We want to make sure that students are getting the resources they need to advance and grow their technical skills and prepare them the best we can while at school.”

“The borough president (Diaz, Jr.) has been working very hard to uplift the school system, but many of the schools are a step behind when it comes to updated resources,” said Joseph Cartagena (Fat Joe’s real name), who graduated from the elementary school in the early 1980s.

“There is no better present than giving the youth the gift of learning – and that what we hoped to accomplish by providing these new computers to them,” he added.

The donation of the 20 Microsoft desktop computers, which will arrive at the school in the new year, was made in memory of Fat Joe’s younger sister, Lisa Cartagena. Lisa, who was also a graduate of the elementary school, passed away as a result of an unsuccessful childbirth at Bronx Lebanon Hospital in the early 2000s.

Under the rap name ‘Fat Joe’, Cartagena, who began his rap career in the early 1990s, has released 10 studio albums and has reached the number one spot on the Billboard’s Hot Rap Songs chart twice in his career as a solo artist. His 2004 song, ‘Lean Back’, with Remy Ma was ranked the number one song of the year on the Billboard’s US Rap Songs chart.

Fat Joe also worked on many projects with late Bronx rapper Big Pun, who passed away in 2000. Major props to Fat Joe for looking out for his community. Sound off below!!!